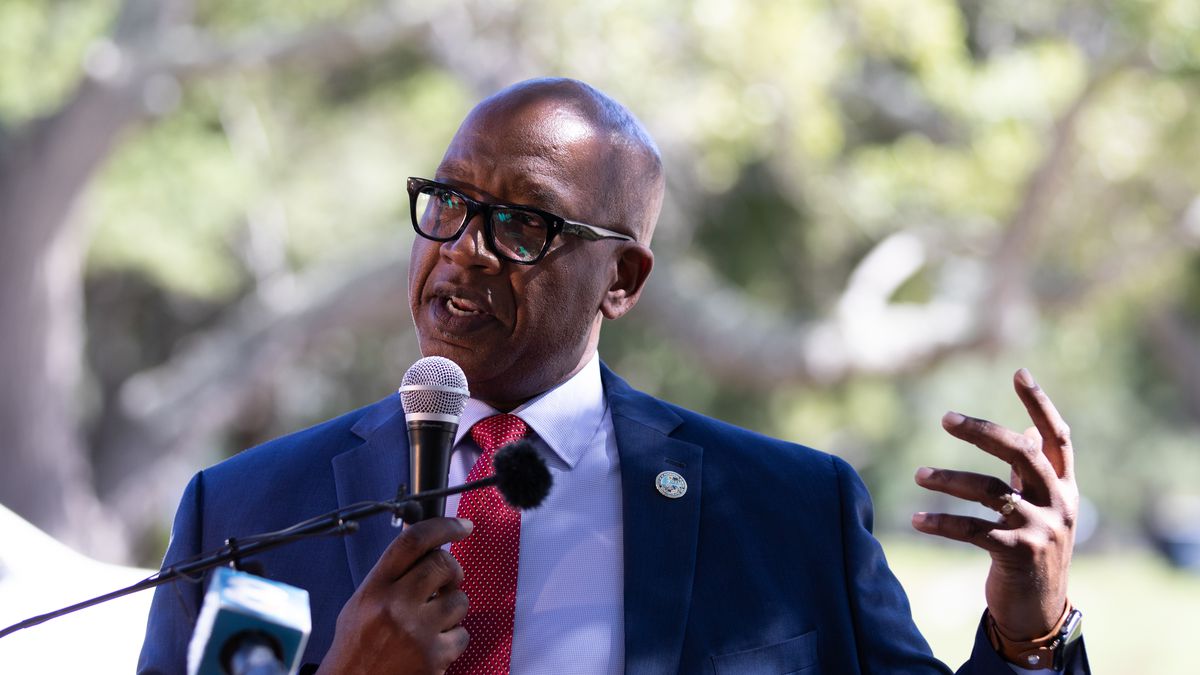 ST. PETERSBURG — Showing off an ax handle from his grandfather’s lumber yard, Mayor Ken Welch announced Wednesday that he would restart the process of redevelopment of Tropicana Field.

Welch is a product of the Gas Plant neighborhood, a black community that was paved for the 86-acre site that became the Tampa Bay Rays baseball stadium. As the city’s first black mayor, he stood Wednesday next to where his family’s lumberyard once stood.

“It’s just a reminder and tangible proof that a thriving community existed here just a few decades ago,” he said. “I think it’s godsend that 40 years after a community was uprooted in the successful pursuit of baseball, we now have the opportunity to bring the promises of jobs, opportunity and equitable development to this that I consider and what many in this community consider sacred ground. ”

Welch rescinded the current RFP issued in July 2020 under former Mayor Rick Kriseman. He said since then, the economic fallout from the pandemic and an affordable housing crisis “warrant a fresh look,” according to a city press release.

A new request for proposals will be issued in four to six weeks specifically soliciting proposals that include a ballpark “to provide certainty on the stadium issue” and where the Rays will play. Rays are authorized to bid or associate with a proposal.

Welch is looking for proposals that make affordable housing a key component. The site must also honor the gasworks community “in an impactful and enduring way” and consider equitable access for all residents. This could include opportunities for education, youth, economic activity and recreation.

“We are also aware of any city subsidies and will take them into account in all proposals,” according to the city.

Welch said he doesn’t believe all parts of the community were heard at the height of the pandemic two years ago. The city plans to hold community outreach events before and after the RFP is developed. The audience can also submit comments on line.

Welch said he plans to select a developer by the end of the year. The Rays’ lease at Tropicana Field ends in 2027.

“We have plenty of time,” he said.

Rays wanna be in Tampa Bay

In an exclusive interview with the Tampa Bay Times, Rays president Brian Auld said he learned about the new RFP when Welch announced Wednesday.

“We’re going to have to sit down and think about it,” he said.

Auld said the Rays didn’t give any information on what should happen, but they did talk about what’s important to the team – that they should come first. He said he trusted Welch’s direction of the process.

“We need a plan to build a new stadium that will allow us to be a sustainable business in the future, a healthy business that is going to generate attendance, that is going to have a lot of liveliness around it, be part of of a very dynamic region,” he said. “But baseball stadiums aren’t getting cheaper. These problems are not getting easier to solve. And so the fact that everyone is rolling up their sleeves right now and really going after this, that’s what needs to happen.

Spend your days with Hayes

Columnist Stephanie Hayes will share her thoughts, feelings and fun stuff with you every Monday.

You are all registered!

Want more of our free weekly newsletters in your inbox? Let’s start.

Explore all your options

Kriseman spent his entire second term developing conceptual master plans and solicit public comment through public meetings before narrowing down developer finalists to Miami’s Midtown Development and Sugar Hill, a JMA Ventures project in San Francisco. Just over a month into his term, Kriseman chose Midtown with the support of the Pinellas County Urban League.

Welch made no promise to honor this choice. He traveled to Miami earlier this year to view Midtown’s work there and more recently traveled to Sacramento to tour JMA’s projects. He invited both proponents to reapply for the new RFP.

Jordan Behar, architect at Sugar Hill, said the group will have to see if the new request for proposals is a new application or a continuation.

“I think the mayor is right and the world is a different place,” he said. “Things have progressed since the start of this project and we’re just happy to keep trying to be as responsive as possible.”

Midtown Development Director Alex Vadia thanked the St. Petersburg community and in particular Watson Haynes of the Urban League for their friendship. Welch declined a request from Midtown for a reunion earlier this month.