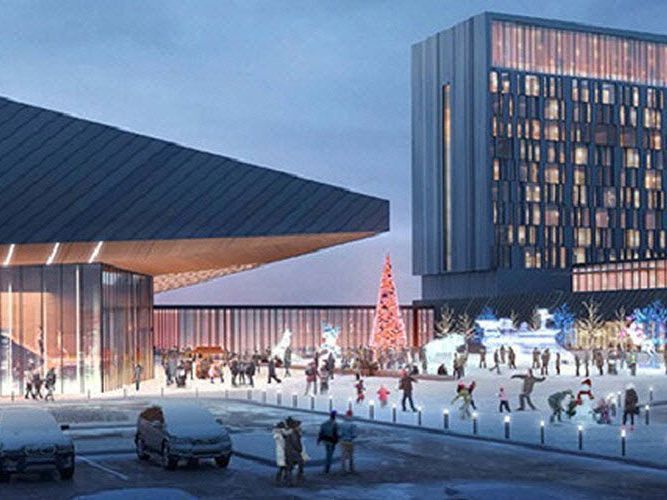 There’s been a crease in the fabric of the Kingsway Entertainment District, but city staff say the project is still on track for a groundbreaking ceremony in 2025.

The city announced it was changing the design-build tender for the event center. Previously, a maximum budget of $92 million had been stated, and promoters were told that if their bid was higher than that, they would automatically be disqualified.

Does that mean the sky’s the limit?

No, the city said, but it will create more dialogue between the parties.

“A relatively new procurement process, known as progressive design-build, manages market risk by increasing the level of engagement between the preferred developer and the client (in this case, the client is the City of Greater Sudbury),” the city said in a release. “With PDBs, a multi-step collaborative process is used to determine an approved final design and associated cost. These milestones provide additional checkpoints for City Council to assess the developer’s approach to building the event center and, if necessary, make adjustments that maintain an appropriate balance between building features and projected construction cost. of the project.

Along the way, the builder and the city will review design features and cost estimates before final decisions are made. The city said this approach recognizes market conditions that affect the availability of materials and labor. It also increases “assurance that the city will get the best value from its competitive procurement process.”

The progressive tenders are a response to an evolving industry, according to the municipality.

“The City has consulted with legal and industry advisors, including the Fairness Monitor who has been engaged in this procurement process since its inception. Legal and industry advisors have confirmed that the construction industry is currently resisting fixed price contracts, such as design-build processes, due to current market risk levels,” the city said. “Developers were unwilling to take on the risks associated with a fixed price contract early in the design process and in some cases refused to participate in the tender. This would reduce the City of Greater Sudbury’s ability to achieve its goal of building a new event center to replace its current 70-year-old community arena.

As the city noted, the procurement process began in April 2017 “with the issuance of a Supplier Qualification Request, which produced three shortlisted teams for the RFP process.”

TESC, a Sudbury-based company that Dario Zulich has been involved with for over 20 years (he is listed as co-CEO of the company on the TESC website), is partnering with Ball Construction for its bid. Based in Kitchener, Ball’s current projects include Durham College, York University and Brantford Power.

Zulich owns the Sudbury Wolves and The Five, which are reportedly two of the event center’s main tenants. He also owns most of the land on which the KED is being built.

The KED will include a 5,800-seat events center (6,500 seats for concerts) funded by local taxpayers; a $60 million casino owned and operated by BC-based Gateway Casinos; and an upscale hotel, owned and operated by Manitoba-based Genesis Hospitality. Neither Genesis nor Zulich revealed which hotel company would fly its flag on the site. The event center is expected to open in 2025.

The city had previously indicated that the event center would cost $100 million; however, critics place that figure closer to $113 million, when current construction costs are taken into account. The longer the city waits to begin construction, the more the center will cost taxpayers.

The city said it has delayed releasing the request for proposals until January 2022 due to COVID-19 “and legal challenges related to the rezoning of properties. Meanwhile, market conditions in the industry construction have changed dramatically.

Following the publication of the call for tenders on January 28, the city received several requests to review the procurement process. The developers asked the city to consider changing the form of the proposal submission “to recognize current market risks, particularly with respect to the effects of inflation, supply chain reliability and the availability of labour”.

The project team and the city’s steering committee determined that moving from a fixed-price contract to phased design-build would ensure competitive procurement “and achieve the best price and value for the municipality.” . A compliance team comprised of city employees, specialist consultants and a fairness monitor remains in place and will continue to oversee the progressive design-build process.

The Star emailed all advisers to find out what they thought of the move to a phased PD. Only Ward 2 County. Michael Vagnini and Ward 5 Coun. Robert Kirwan responded.

Kirwan said he doesn’t expect the move to a phased RFP to make much difference.

“The shift to the phased design-build process should have no impact on our projected timeline for completion of the event center in 2025. We simply acknowledge the shift to alternative procurement methods that are used in the industry. construction,” he wrote. “This will actually allow the city and the preferred developer to collaboratively manage any market risks that may arise.”

Kirwan, a KED cheerleader, said he remains confident “we will have a competitive process that will end with the best price and proper design as a major component of KED, which will be one of the most spectacular of its kind in the province.The change in process will still allow us to be able to approve the preferred developer and final budget at our City Council meeting in July.

Vagnini was more hesitant. He has worked in the financial industry for 40 years and he said progressive tenders are not common.

“It’s something very new for me,” he said. “At the same time, I think it’s just a way of presenting a tender, but without a financial cap.”

Vagnini said those bidding on the project “have no risk because they can just say, ‘It was supposed to be a $100 million project, but it’s going to end up costing $120 million.’ I’m not in favor of that.”

Vagnini said it’s like having a house built and finding out — after learning it will cost $500,000 — that faucets and faucets are an extra cost.

He mentioned Health Sciences North, which was built 20 years ago with no ceiling, then delayed for years due to higher-than-expected costs.

“And look what happened,” he joked. “I don’t think progressive bidding is good business. Unless I misunderstand their way of working, it’s an open market.

The first phase of the procurement process is expected to be completed early in the third quarter. Staff will then provide information to council on the selection of the preferred developer and seek council approval on the final budget to complete the project.